Well, the word "garden" is used very loosely here.
The almost-garden I speak of consists of several dried, sad potted plants that haven't been watered since I found out we are moving. The poor things look even worse after the past few freakishly hot days. Oh so sad! I didn't dare photograph them. 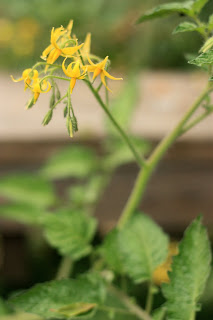 But there is some hope out back. Past the shriveled roses and unidentifiable clusters are three huge tomato plants that have been watered and have many nice, smooth green tomatoes too. They will turn red. They must turn red. There are even a ton of blossoms that survived the heatwave. I see some hope in those yellow blossoms and non-red tomatoes... 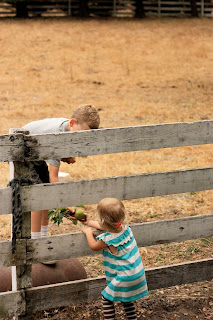 I had three hopeful little ones team up and gather pears. They are almost ready and we are hoping to eat some tomorrow. I see hope in those pretty pears picked with eager little fingers... 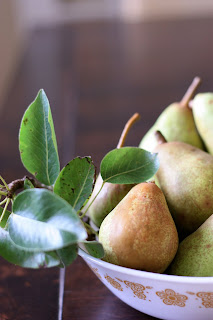 And look how pretty their harvest is! Edible or not, they sure look good. 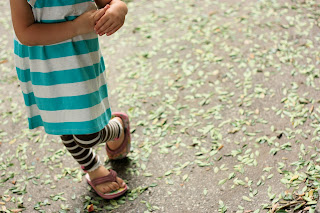 All the while we were crunching around in a zillion little leaves. They were blown and scattered about the other night during a wind storm creating a blanket of green. They are giving us a glimpse of Fall. I see hope in those grounded leaves and in those sassy, independent stripes of hers.

There is a new season ahead.
In more ways than one.
Posted by Natalie T. at 12:36 AM
Labels: childhood, photography, the ranch