I have to share an awesome kid-creation today. This is a special project not only because of the artist that created it (my Sully-boy) but because it was made from the heart, for his baby sis. It was a long time in the making. I should have titled this post "1000 Cranes For 1000 Miles, In 1000 hours'. 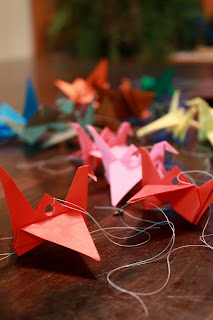 It's Sully's version of a "1000 Cranes" project that he found in one of the many origami books he has checked out from our old library. (Miss that place.) There are so many neat books, new and old on the subject for him to choose from. I hope he loves the art form forever. 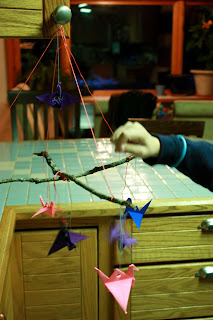 Especially because I get to enjoy the product of all the folding, creasing and trial and error that happens. Every time he ends up with something beautiful like this... 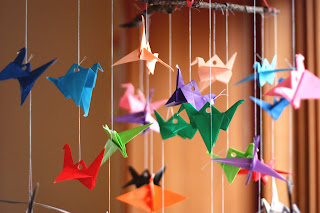 He turned all those cranes (not really 1000, but close) into a mobile with embroidery floss and some sticks found in the yard. The hole punching and tying teeny knots became a little tedious and took two evenings, with my help, to get it just the way he wanted. Very precise that boy of mine. It was meant to hang in Minna's room. Yet, it's still up in the dinning room because we couldn't find a good spot in Minna's unique and quite small room for it. (A tour of her little corner coming soon!) 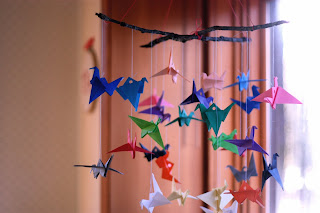 I reassured him that we would figure something out and in the meantime he is letting me keep it where it is. I am so lucky.
One of the neatest parts of this project is that Sully started it back in California. He probably had about half of the cranes done before we moved. We pressed each one flat and wrapped them carefully and put them in a box to be packed and shipped with all our stuff. They made it safe and sound and he picked up where he left off. He began as soon as he had his origami bag and his desk set up.
The sweet little guys actually traveled something more like 3000 miles if you can believe it.
That's a lot.
I sure am glad they made it.
(3/18/11) Sully said that every crane he makes from now on will be a tribute to the victims and survivors of the earthquake and tsunami in Japan. Folding 1000 cranes is to bring happiness and peace to those in need. After I read this post to Sully he said "I will hope for all those families while I fold."
That's the idea, my sweet boy...
Posted by Natalie T. at 12:58 AM
Labels: childhood, island time, other projects