Gotta Feeling About These Two...

One of our big reasons for taking our trip this summer was to attend Jeff's baby sister's wedding. What a romantic and sweet and genuine wedding it was! That new brother-in-law of mine magically made tents and umbrellas wrapped with matching hand towels for each guest appear the morning of, as rain pounded the location. Amazing. Even more amazing was that the sun peeked out just as the bride started her walk down the staircase. No joke. 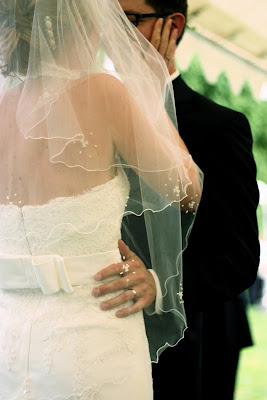 Anyway, I knew I wanted to stitch something for them as part of their wedding gift. My original idea was to embellish an overhead view of the map I found of the gardens where they were marrying. I even drew it out all fancy, traced, retraced and put about 10 hours of stitching flowers into that idea before I decided against it. It wasn't even bad. I just decided I hated it. 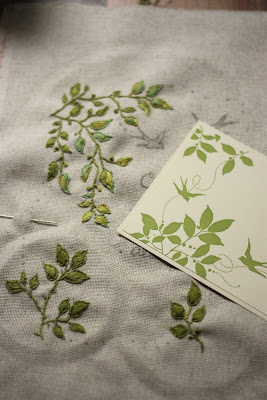 So, instead, I used the pretty leaves and birds from their invitations and tried to recreate them on a little panel. I used three shades of the light, yellowy green and a natural colored piece of linen from our local yarn store. (The owner happens to be an embroiderer herself. :) 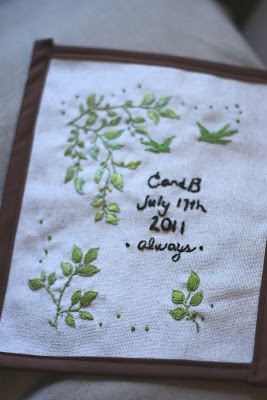 Then, I just stitched in the wedding date and bound it with brown. I was happy with it. Especially the birds flying towards each other. Romantic touch, I thought.

I was sooooo nervous giving it to them. Sweating, actually. They seemed to love it and like that it was drawn from their invites and stuff. Phew! 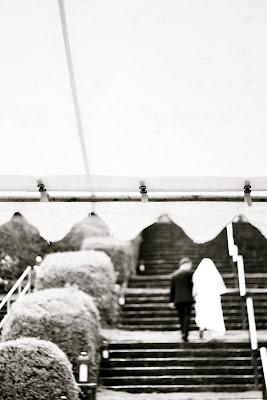 I really loved making it and I love them. That's what it's about right?

Also, I keep meaning to share that we had a fun limo ride to the wedding. There were 11 people all dressed up and excited crammed in there. That song, "I gotta feelin', woo hooo, that tonight's gonna be a good night..." (Black Eyed Peas) came on and all of us, with our various ages and rhythmic abilities started toe tapping and dancing in our seats. It seemed so fitting and hilarious and perfect.

The only downer is that I learned exactly how old and out of touch I am. The boys wanted to get that song to dance to at home and I kept asking everybody, "What was that new song that we all danced to in the limo yesterday?"

But it's got the kids and I dancing here and now in 2011. Plus it will always remind me of us giddy in the limo, riding and dancin' in style. It really was a good night.